Lexmachine is a lexical analysis (or tokenization) library for Go (golang) and it just got faster thanks to a new backend I wrote. This article is going to explain the new backend, how it works, and why it is faster. If you want to use lexmachine checkout the documentation or the tutorial.

Lexical analysis is the process of breaking strings up into substrings, called lexemes, and putting them into categories called tokens. This process is also called tokenization and is the first step in parsing complex file formats, programming languages, network protocols, and other information. Let's look at a quick example, suppose we wanted to process a custom configuration file format. For instance, sensors.conf describes how Linux should translate the raw readings hardware monitoring chips to real-world values -- such as voltage and temperature. The first part of my laptop's sensors.conf file begins with the following:

The categories are defined by patterns which are expressed as regular expressions. As a quick review, regular expressions (regex) are a "pattern" which describe a set of strings. A regex is made up of characters (a, b, 0, @, ...) which combine with the operators: concatenation abc, alternation a|b, grouping a(b|c)d, and repetition a*. Some examples:

In the running example of the sensors.conf file one might define the following patterns:

These patterns define how text in the input should categorized according to the rules for the sensors.conf file.

Now we turn our attention from what lexical analysis is to how it works. Specifically we are going to concern ourselves with the following matters:

The lexical analysis problem on the other hand seeks to break up (tokenize) a long piece of text based on an ordered set of regular expressions. It does this by proceeding from the start of the string and finding the longest prefix of the string that matches at least one pattern. It then chooses a matching pattern with the highest precedence and outputs the matched text (lexeme) and the category the pattern defines (token type). Solving the lexical analysis problem with a standard regular expression engine is possible but not efficient. With a standard regex engine, the whole piece of text has to be repeatedly scanned for each token to decide on the longest prefix match and highest precedence token type to use.

Efficient regular expression engines are implemented using the theory of finite automata. Automata or automatons are theoretical mathematical constructs which specify a machine. Specifically, a machine that reads a string, character by character, and decides whether it is in some language or not (see Figure 1). The language is a type of formal language called a regular language or a Type-3 language in the Chomsky Formal Language Hierarchy. 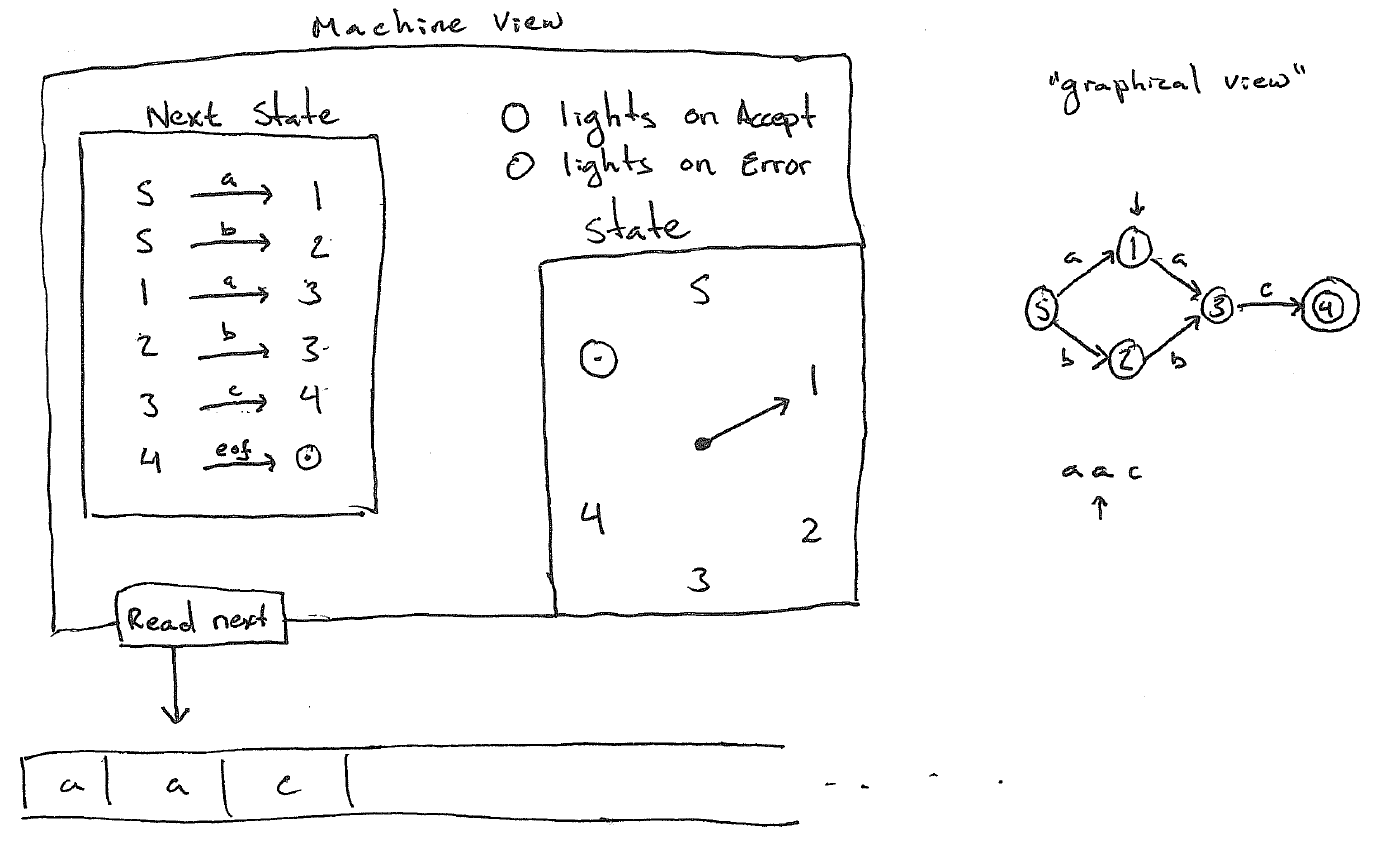 Finite state automatons encode their matching "program" as a set of states \(S\), an alphabet \(\Sigma\), and a transition function which maps the current state and next symbol to the next state \( T: S \times \Sigma \rightarrow S \). There are several distinguished states: the starting state, and one or more accepting states. At each step through the input string the machine reads a character and consults the transition function to determine the next state. If at the end of the string the state has reached an accepting state the string is said to match the automaton.

When the transition function \(T\) produces multiple states for the same input combination the automaton is said to be non-deterministic. Figure 2 shows a non-deterministic finite automaton (NFA) for our running example for sensors.conf. In the figure, the starting state (state 0) may transition on character c to states 12, 21, and 40. This may be interpreted as the machine transitioning to all of these states simultaneously and maintaining multiple threads of execution. Simulations of NFAs must keep track of each independent thread of execution. If an NFA has \(n\) states and a string has \(m\) characters it can be matched in \(\mathcal{O}(n \cdot m)\) steps. 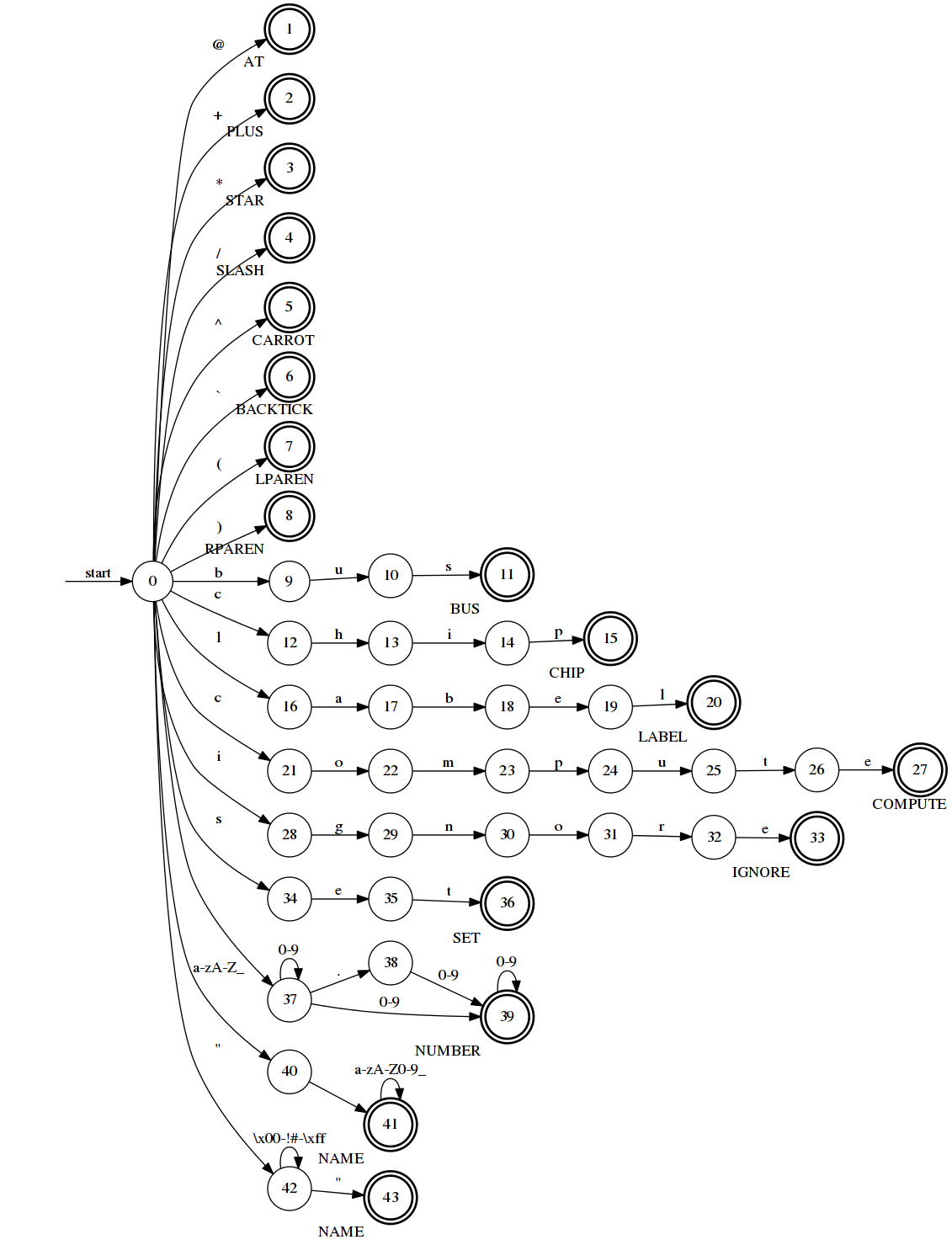 To use an NFA for the lexical analysis problem several adjustments need to be made.

As languages get more complex the cost of tokenization goes up when using NFAs because the cost for matching a regular expression is dependent in the size of the NFA (\(\mathcal{O}(n \cdot m)\) where \(n\) is the number of states in the NFA and \(m\) is the length of the string). Can we do better? We can! If we do not allow the transition function \(T\) to produce more than one state for each input combination the automaton will be deterministic finite automaton (DFA). If the automaton is deterministic then simulation is greatly simplified versus a non-deterministic automaton. Recall, in the case of NFA simulation non-deterministic steps are modeled by having the machine transition to all possible next states at once and keeping track of multiple threads of execution. In a DFA, there will always be one (and only one) state to transition to -- and therefore only one thread of execution. If there is only one thread of execution the simulation can be run in \(\mathcal{O}(m)\) steps (where \(m\) is the length of string).

Figure 3 shows the minimal DFA for the NFA given in Figure 2. By coincidence there is one fewer states in the DFA than in the NFA. In general, this will not be the case. Indeed, in the worst case if the NFA has \(n\) states the DFA could have as many as \(2^{n}\) states. However, on average the DFA will only have \(n^3\) states. Thus, a DFA makes the classic space vs. time tradeoff. It uses more space (in the form of a larger transition table on average) to get faster execution time. 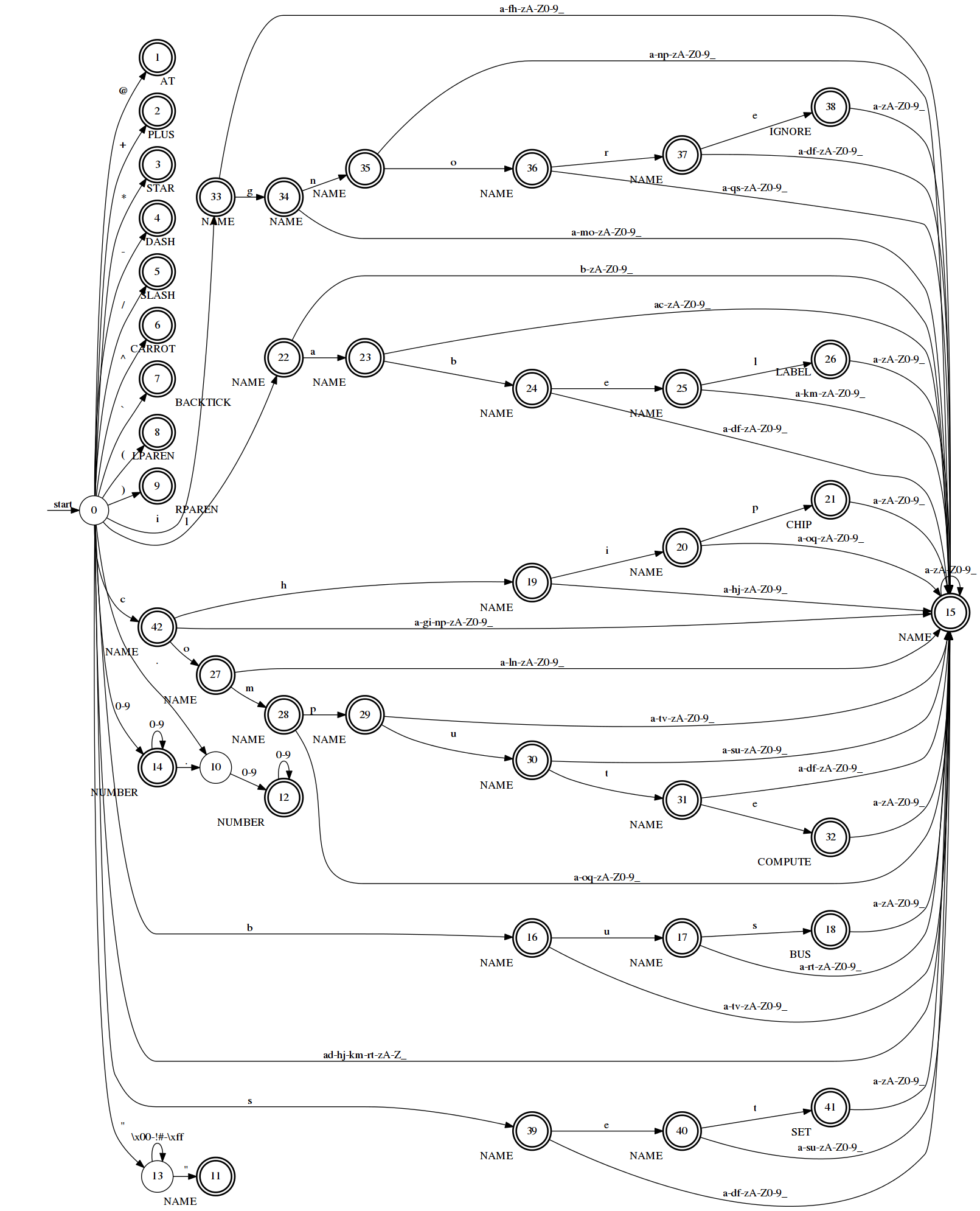